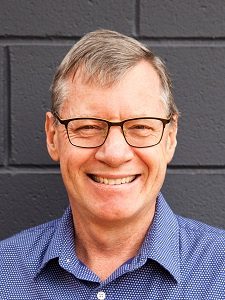 Craig was raised on the Gold Coast. He was raised in a loving home, but one that had no church affiliation. He entered medical school at the University of Queensland in Brisbane graduating as a doctor in 1985.

However, his life changed forever in 1984 when friends shared the gospel of Jesus Christ with him. Christ became his passion.

In 1989 he had to choose – medicine or ministry? He chose to enter the ministry and enrolled at The Master’s Seminary in Los Angeles. During his time at seminary he served as one of the singles pastors at Grace Community Church. It was during this time he met and married the love of his life – Dena.

In 1993 he and Dena returned to Brisbane and with a few other families planted what became Grace Bible Church.

He has been shaped by the ministries of many men – men from history such as Martin Luther, John Calvin, Jonathan Edwards and Charles Spurgeon – and men from today – in particular John MacArthur, John Piper and Don Carson.

Craig and Dena have four wonderful adult children and one incredible son-in-law. They count it as a great privilege to serve the flock at Grace Bible Church Holland Park.